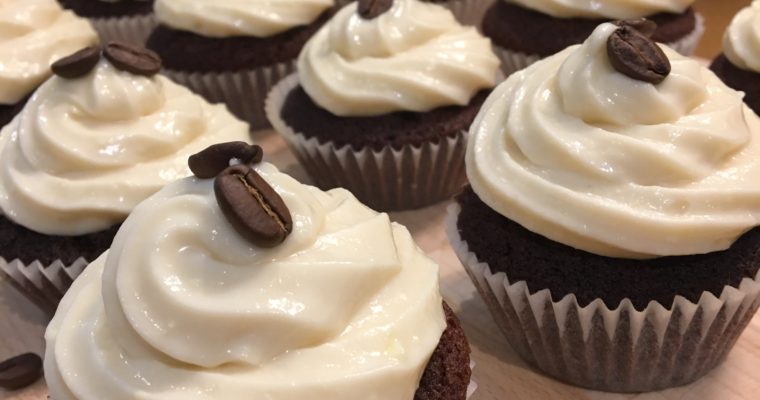 When I found out a dear friend of mine was leaving the office I work I knew exactly what her leaving cake needed to involve. Aside from a chilled prosecco there is only one drink you will find her with in her hand – an […] 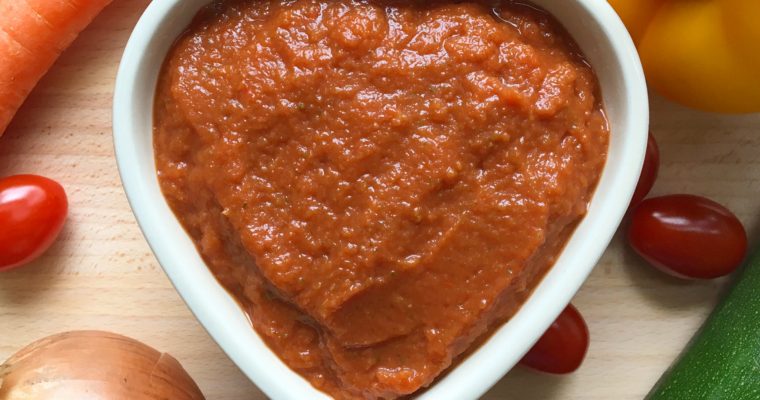 As the summer veggies come into season and you want to spend more time out that in the kitchen, you need this recipe in your life! This Super Versatile Vegetable Sauce tops any bog standard jar of tomato pasta sauce in nutrients and is ridiculously […] 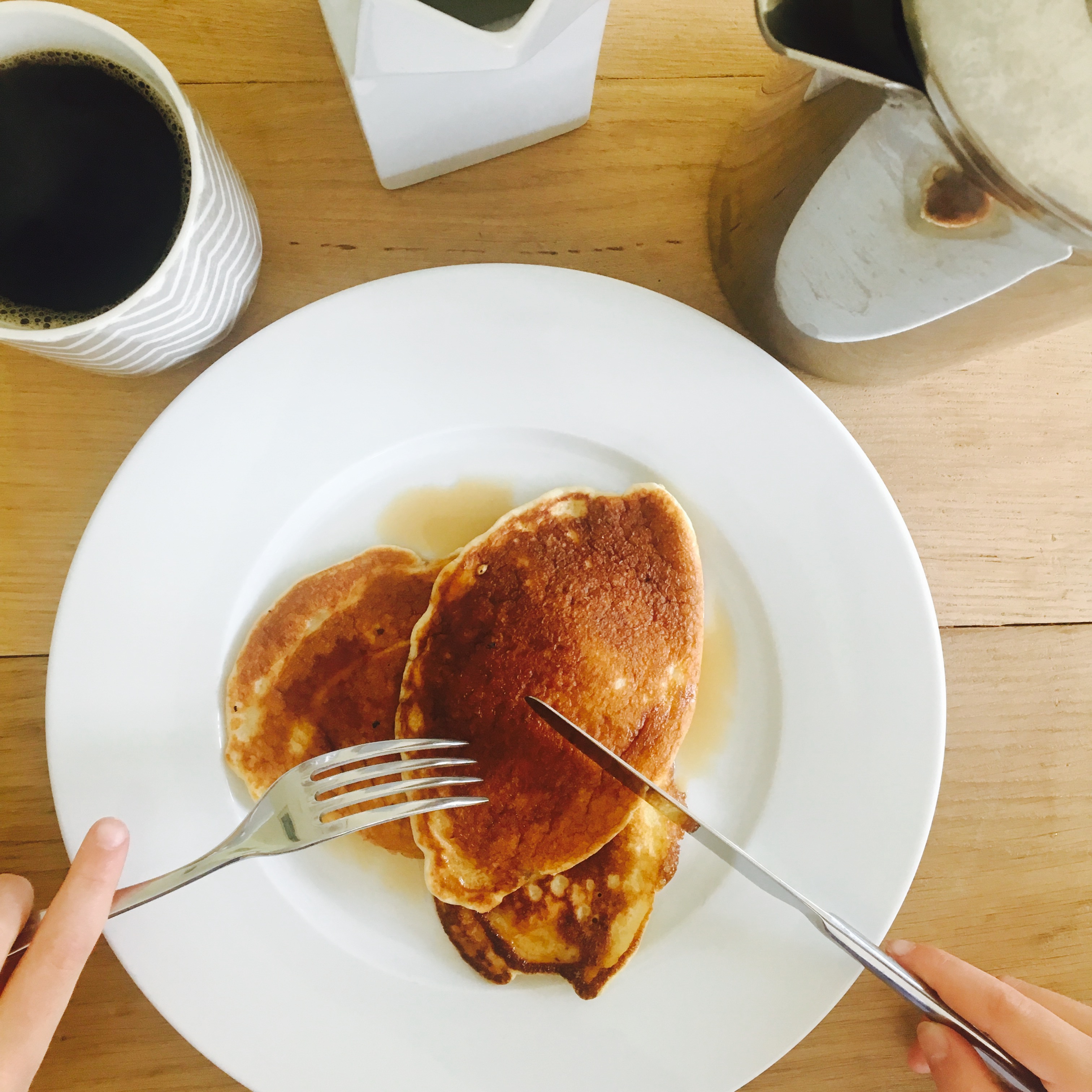 It’s so annoying when you have milk which says it’s in date but has just turned. Or is a day out and tasting off. But did you know that as long as it hasn’t not separated, this just-gone off milk can be used in cooking? Which is why these Spoilt Milk One Cup Pancakes saved my sanity – and breakfast – one day.

One morning, after the kids spat out their cereal in disgust, I found myself with over a litre of milk I was loathed to throw away. But after a bit of a think about where any sour tang would work decided to give some pancakes a go. These are an American meets French style pancake, they aren’t too think and fluffy but are sturdy enough to be frozen which is what you need to do with a lot of milk to use up! They are also massively adaptable. I made a straight batch, then another portion with blueberries and a chocolate batch. You could add some raspberries, chocolate chips, raisins, grated parmesan – they are a really good vehicle for adding lots of flavours.

And of course you don’t need sour milk to make them! Fresh is just fine too!! But when you consider that a estimated 360,000 tonnes of milk is thrown away dail in the UK, it would certainly help if everyone made these pancakes… And they are just so easy, you only need a cup, no need to worry about a measuring jug or scales.

Given the milk would have been binned the pancakes cost pennies to make with the egg and flour coming in at just 30p using economy flour – which is absolutely good enough. 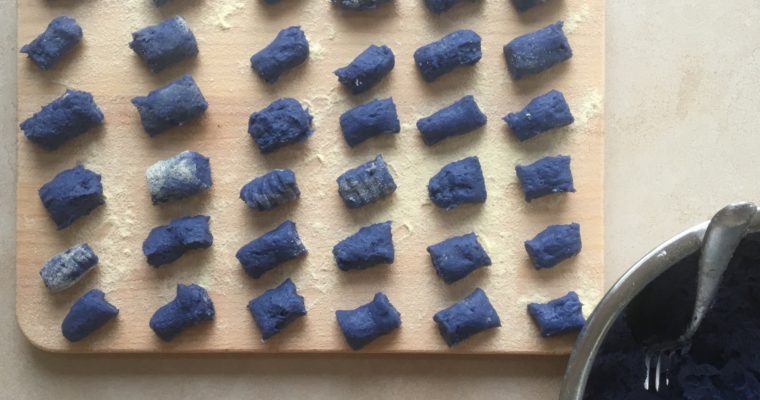 The debate over whether you can taste the difference between fresh pasta and dried rages on, but for many people making pasta seems like a difficult and long winded process requiring lots of equipment. But that’s not the case with this Simple Gnocchi, which is […] 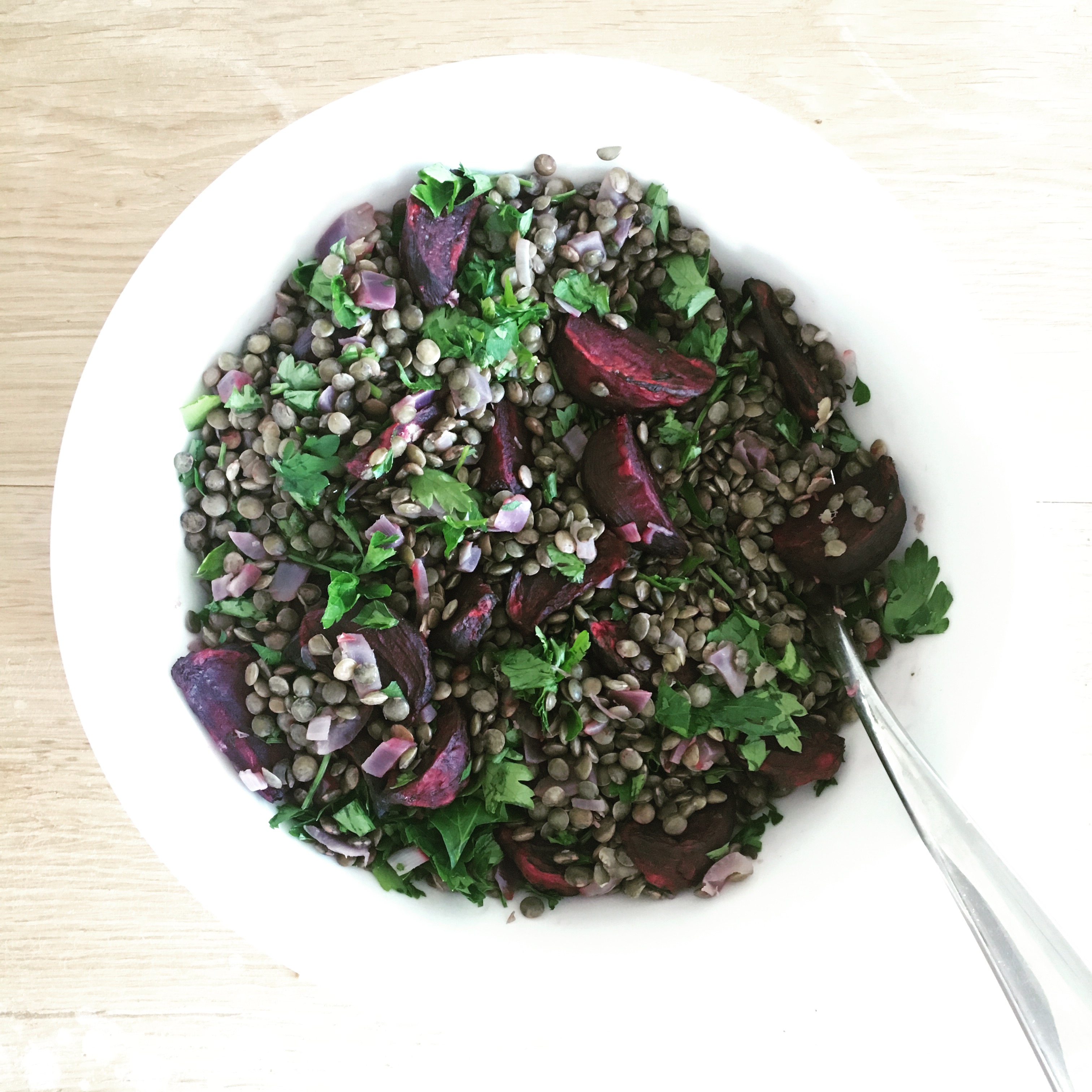 I love lentils. There, I’ve said it. They are so picked on and ignored as a foodstuff but do not deserve their bad press at all. A nutritional powerhouse, easy to cook and really cheap and filling too. Quite why they are so derided is beyond me!

There is an image of lentils soaking for days and taking ages to boil. But this couldn’t be further from the truth. Puy lentils take only around 20mins to cook. This recipe used Puy lentils which go under several names including French lentils or bulga lentils. You will recognise them because they are tiny and look a dark green/black. They don’t particularly expand when you cook them and in this recipe it’s important not to use the tinned version as they are too cooked – you want them to retain their shape and bite.

In this recipe I have used fresh beetroot. Again, don’t use the pre-cooked version as it’s too soft and watery. When you bake the beetroot for this dish it’s soft inside but gets its own ‘crust’ from roasting so doesn’t mush into the salad or spread its colour over the other ingredients. Plus it’s really easy to do and will bake while your lentils are boiling.

If you would like you can eat this salad warm but it’s great cold too. I use it as a base salad and add a new protein each time – you could try feta, tofu, Quorn or chicken. Because lentils are so cheap and in the summer beetroot is a bargain this dish is very reasonable. This mix will make 4-6 portions and comes in at around £2.40, so about 40p-60p a pop. 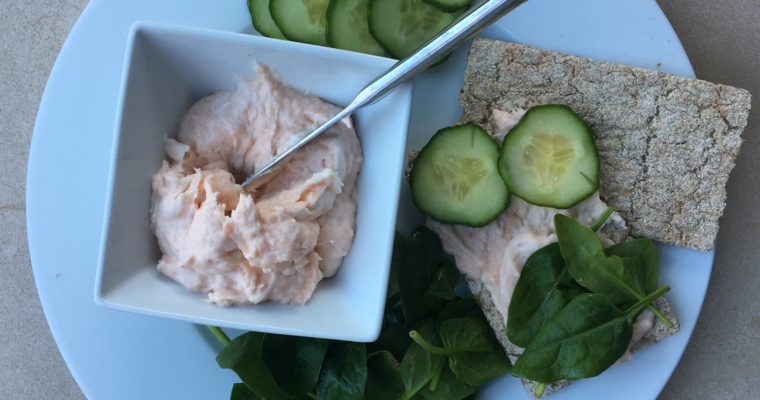 Shop bought pate can be a bit of a rip off, often bulked up with not so nice or totally random ingredients and not enough of the bit you were buying it for! That’s why I like to make my own. This Smoked Salmon Pate […] 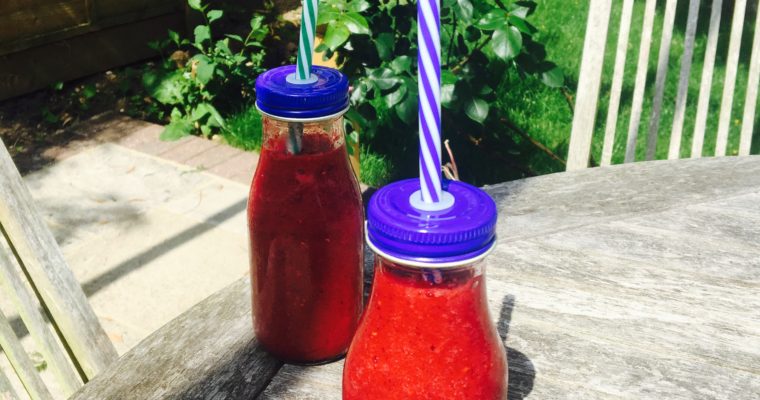 Frozen berries are such a godsend in our house. The kids love eating them straight from the freezer which, along with their questions about Slush Puppies, lead to this quick and refreshing after-school drink, Very Berry Slush Smoothie. I always make sure there are frozen […] 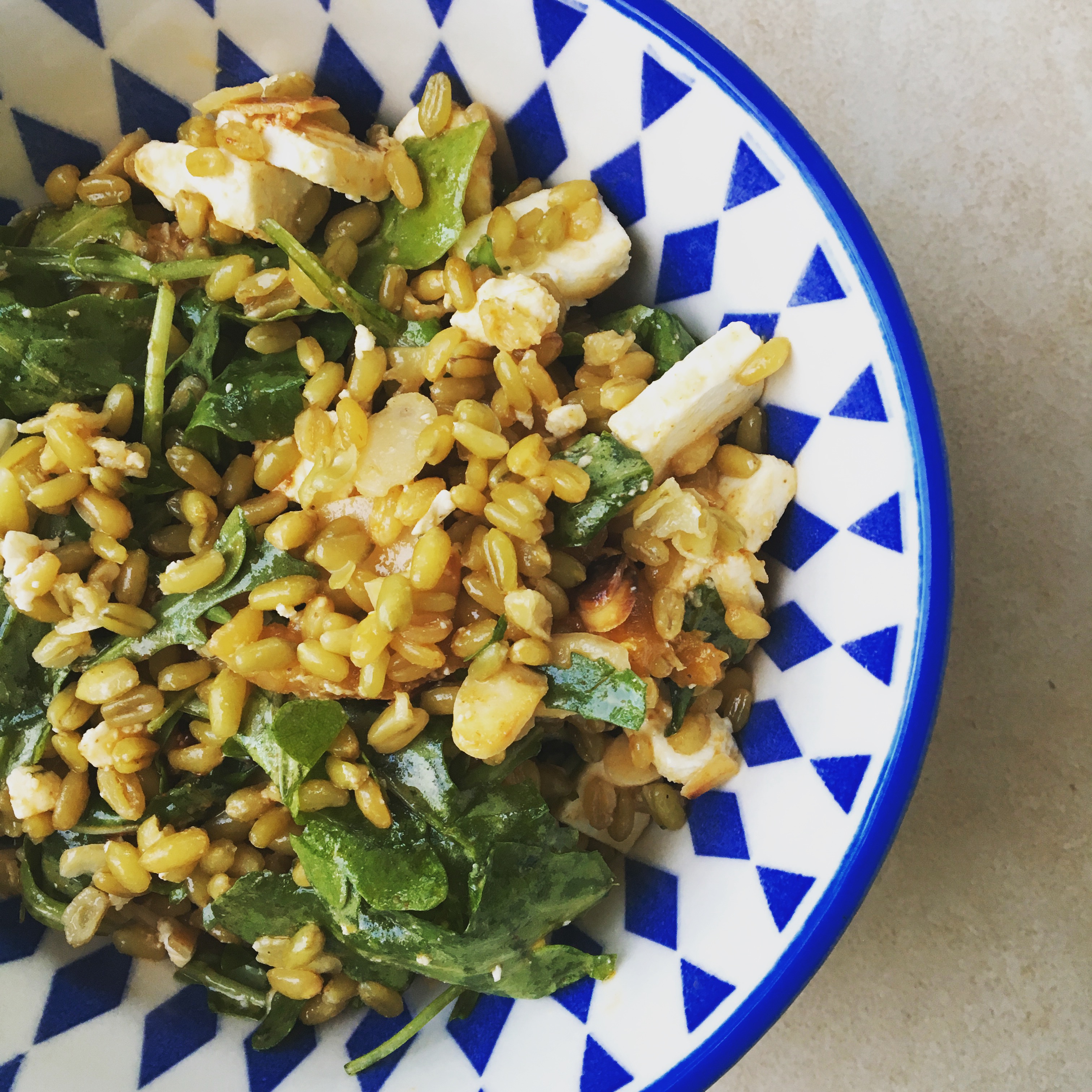 Last year everyone was going freeky about freekah which is no bad thing as frankly this grain is ace! I have so many salads in my life with the grain but this is my Moroccan-style Freekah Salad.

You will not be reaching for the snacks if you tuck into this for your lunch, I’m sure. You could add some olives, roasted butternut squash or finely sliced spinach too if you wish to bulk it out further or use up any foods laying around.

This makes four portions (main meal size) and comes in at around £1.30 a portion. While that doesn’t sound super cheap it’s incredibly filling so you won’t need anything else with it. 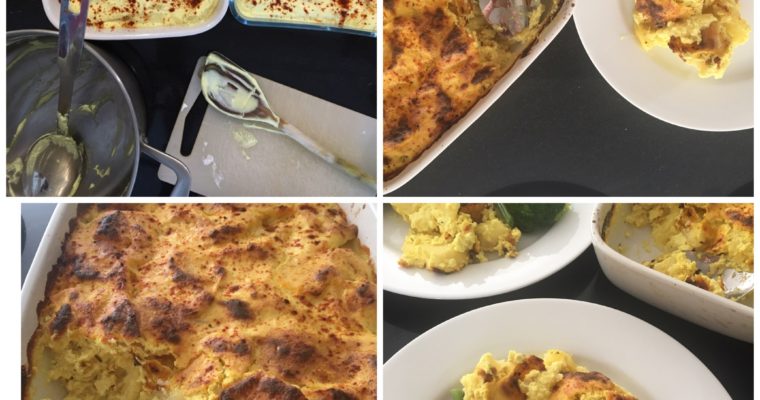